There’s a Dual CD Release Party at Propaganda this Friday! The Thieving Hand and Sunnyvale will both be releasing new CD’s on January 8.  “I See” Said the Blind Man is The Thieving Hand‘s 2nd release.  Paved is Sunnyvale‘s first.  $10 cover charge gets you both CD’s.

Three other bands will be playing as well: Woolbright, Back Home, and Mykal Morrison. 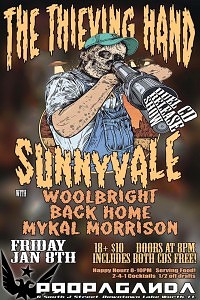 all areas, Lake Worth

New Year’s Eve in Lake Worth!

A Rockin’ Christmas on the Way!

all areas, Lake Worth